The very first Post Tensioning association awards dinner took place at Tottenham Hotspur Football Club on the 21st April 2016. The evening was a great success and enjoyed by all 130 + guests and our award entries showcased some of the very best applications of post tensioning in the UK. The PTA presented four awards that were judged by leading industry experts. Full details of award winners and the judging panel are below. 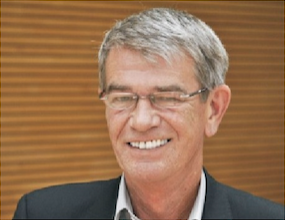 Gordon Clark has 40 years of experience in civil engineering, primarily in Bridges and Highways. He is a Fellow of the Institution of Civil Engineers and the Institution of Structural Engineers. His early experience was in concrete and steel bridges and especially in post-tensioned concrete. He joined Gifford in 1976 and was head of Civil Engineering from 1999 to 2007 following which he became the Chairman, prior to the acquisition by Ramboll in 2011. He was Project Director for the award winning Gateshead Millennium Bridge which has become an icon around the world.

He became involved in work researching and investigating the problems with grouting of prestressing tendons which emerged in the UK in the early 1990's and is a primary contributor to the development and improvement of standard for post-tensioned bridges internationally. In fib and in CEN and ISO he has contributed to work in the fields of Post-tensioning, Grouting and Durability.

He was President of fib for 2013 and 2014, and serves on several technical Committees and Working Groups. In the UK he is chair of the British Standards Structural Concrete committee and is a non-executive Board Member of CARES, the Certification Authority for Reinforcing Steels. 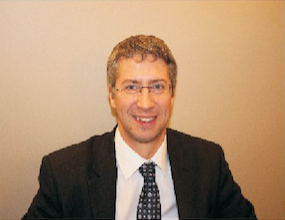 Chris is an Atkins Fellow and Head of Bridge Design and Technology. In 2012 he as awarded the Royal Academy of Engineering Silver Medal and was elected a fellof of the Royal Academy in 2013. In recent years Chris has led some of Atkins' most complex award winning bridge projects including the design and construction supervision of the cable replacements of the 225m span cable stayed Penang Bridge (Malaysia), the design of the 152m span balanced cantilever New Medway Road Bridge, the design of the 67km long Dubai Metro Viaducts, the bearing replacements and strengthening for the Forth Road Bridge and the main cable management of the Severn Suspension Bridge. 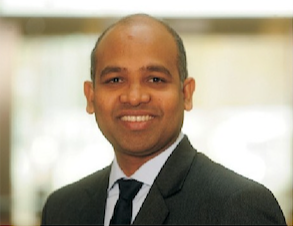 Nadarajah Surendran is a Chartered Structural Engineer and a founding member of Praeter Engineering Ltd. He is been involved in PT industry for two decades with experience in Asia, Australia & the UK. He was the technical leader on the award winning Heathrow East Terminal MSCP.

Suren is a past chairman of the PTA and was a member of the UK CARES Policy Advisory Committee (PAC). He has been a member of fib UK since 2012 and is currently servicing as its vice-chairman. Suren is also a member of the fib Task Group 1.3 Buildings (Commission 1 - Structures) that aims to publish reports on the latest technological developments in the industry. he also currently serves as a member of MPA, The Concrete Centre's Structural Steering Committee. 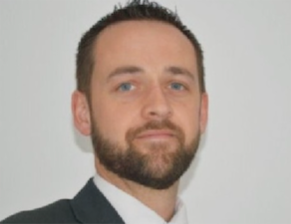 Matthew has 15 years of experience in the design of structures, including post-tensioning. he is currently the General Manager of CCL Engineering (Europe) leading a team of design engineers based in leeds. he and his team also provide extensive technical support for site-based activities including supervision and training. At CCL, Matthew has been responsible for the delivery of post-tensioned projects such as Strata and St. George's Tower (London), Buildings in Leeds University, University of Sheffield and Bradford College. He has also worked on Heathrow Terminal 5B and Atlantis Hotel, The Palm.

Matthew is a contributing member of the Post Tensioning Association (PTA) series of Guidance Notes and sits on the PTA Technical Committee. he regularly presents CPD seminars in the Uk and Europe. 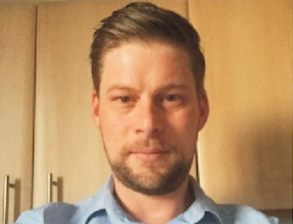 Nick Bull is a Civil Engineer who has been working in the Construction Industry as an Engineer or manager for the past 22 years.

he has been working for Interspan for the past 7 years in the UAE, Australia and UK carrying out a senior management role in each Business focusing on OH&S, Quality and Operational Deliverables.

Block 'A' has 3 basements below ground floor, with B3 sitting 13.345m down from the ground floor. In order to achieve a tightly programmed basement dig a new philosophy was adopted on the traditional 'top-down' solution. This consisted of casting the B2 slab directly on prepared ground. A separation membrane was then installed prior to casting the B1 slab directly on top of the B2 slab. In order for the basement excavation to B3 to progress rapidly without the impediment of restricted headroom, the B1 slab was permanently connected to plunge columns whilst the B2 slab was temporarily hung from pre-installed tie bars from the B1 slab.

On completion of the excavation the B2 slab was transferred from the temporary supporting tie bars onto strand jacks where it was then lowered down into its permanent position before being connected to the column supports.

The judges were looking for an entry that celebrates the excellence in use of post-tensioning, exploits the attributes of post tensioning, innovation, sustainability and value for money and the Clarges was indeed a worthy winner

Hammersmith Flyover is a precast segmental bridge with pre-stress which is partly internal and partly external. Iy was finished in 1962 with electric heating to obviate the need for de-icing salt but has been salted for 50 years.

The pre-stress was deteriorating seriously and emergency strengthening to critical sections, known as "Phase 1", was rapidly installed in 2012 enabling full reopening for the Olympics. It was decided that new pre-stress should be installed to make it independent of the original and allow this to become completely ineffective.

It is believed to be the first time full replacement pre-stress has been installed in a bridge where it was impossible to remove the original. Doing this in the very confined space forced an unusual amount of navel solutions developed with extensive collaboration between Freyssinet and the designer.

The project entry from Ramboll for the Hammersmith flyover was deemed to be of such high standard and so unique that it deserved a category of awards all of its own. This award was created as a one off to showcase this project and the skills and innovation involved in delivering it. Although Ramboll received the award for the entry the project does showcase the excellence of all parties involved
This was a true collaboration of industry experts to deliver a technical complex and challenging project. 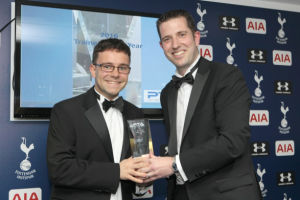 This was the first new award of the evening and was introduced as a way of recognising the excellent work that PTA members do in attracting, training and developing new talent into the post tensioning community.

The submission from WSP for Nathan Fieldsend was of extremely high quality and clearly demonstrated that Nathan was not only following a clearly defined and well structured training and development plan but was excelling in both the eyes of his team and his manager. 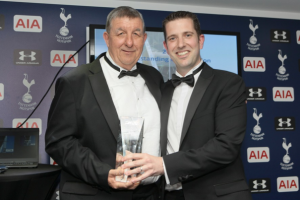 The second of our new awards was for outstanding contribution and was awarded to Terry Bradley for over 40 years of service to the post tensioning industry.

Terry started work as an operative in post tensioning 40 years ago and is now Operations Director of a major post tensioning company.
Terry has worked all over the world on numerous types of post tensioned structures from slabs, silo’s and nuclear power stations to dams, bridges and heavy lifts.
Terry has been a key figure in industry training of PT operatives and was the chairman of the national working group on post tensioning for construction skills.
Terry’s pride and passion for post tensioning is well respected, not just within his current business but by the entire industry.

Photos of the awards are below. 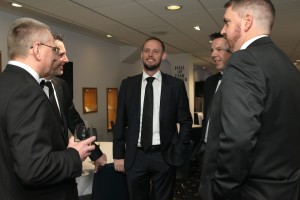 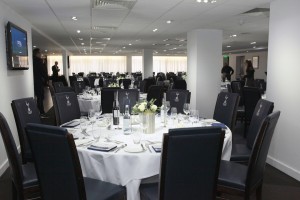 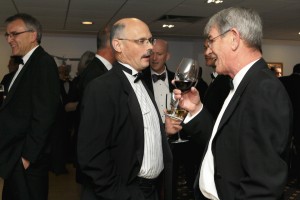 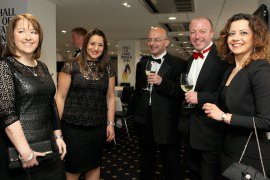 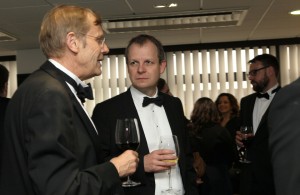 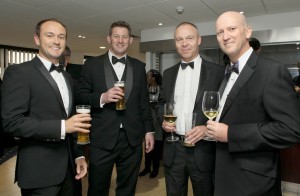 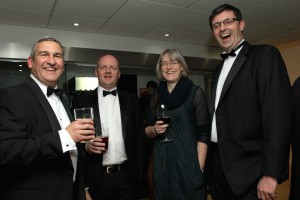 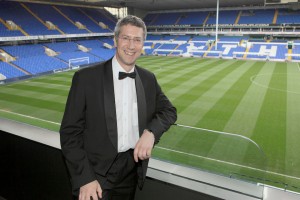 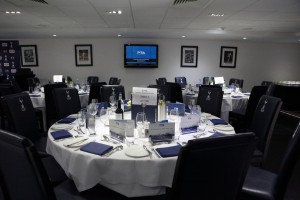 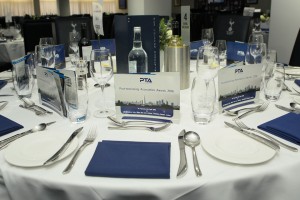 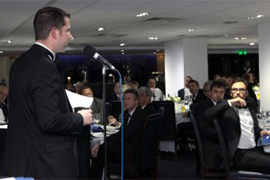 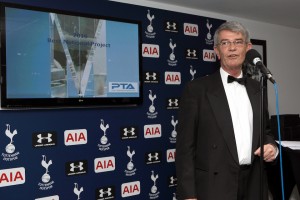 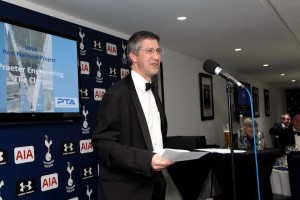 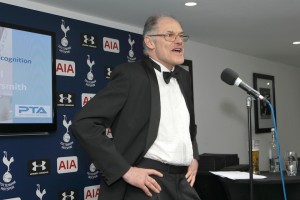 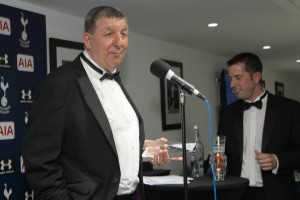