The PTA Award dinner was held at the Kensington Roof Gardens on 19th June 2017. 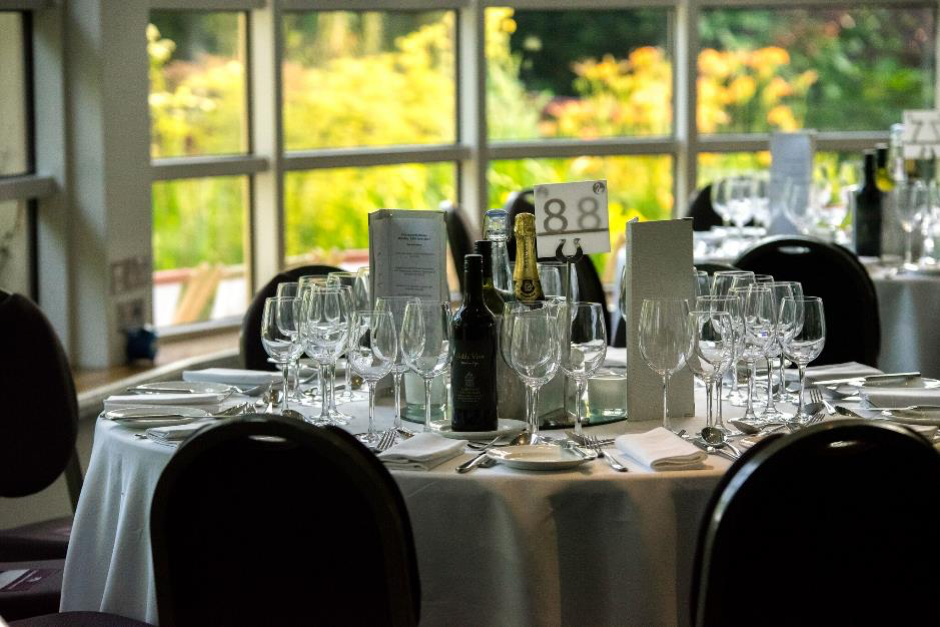 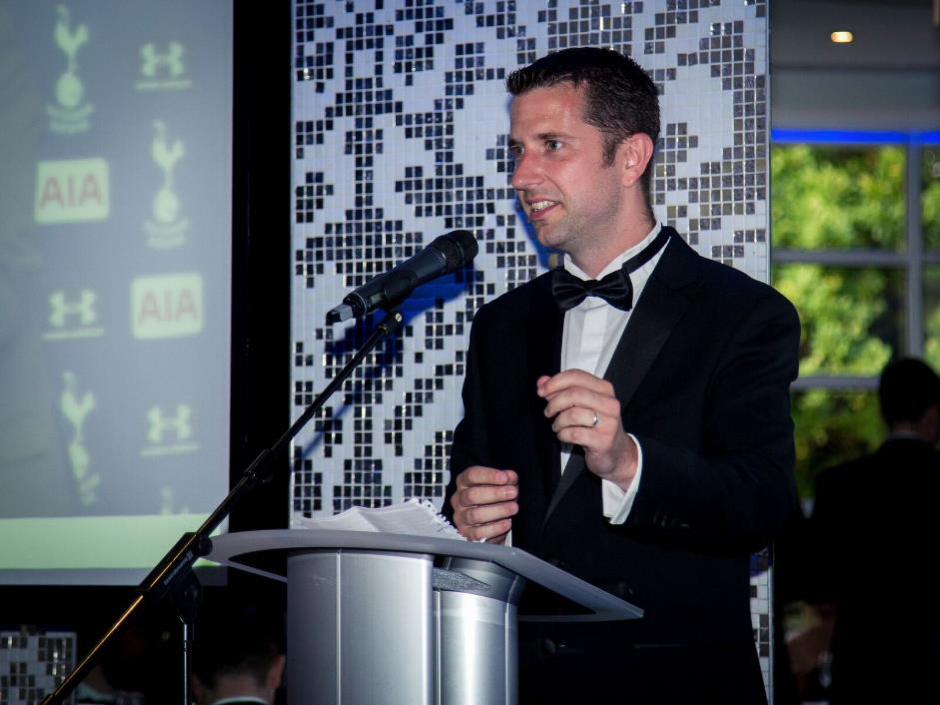 This award aims to recognise excellence in post-tensioning design and execution by PTA members. The entries are also judged on how well the attributes of post-tensioning have been applied: innovation, sustainability and value for money. 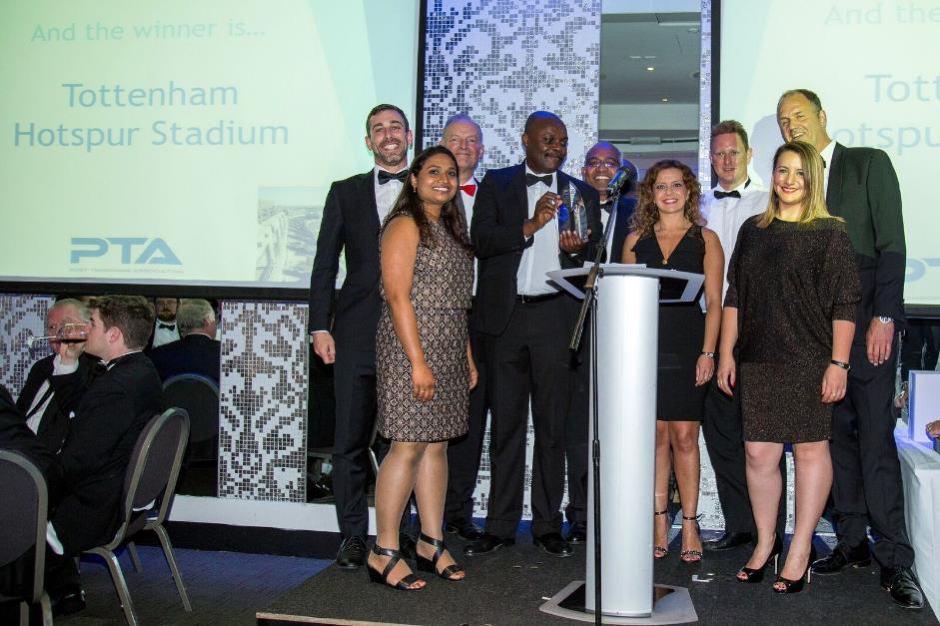 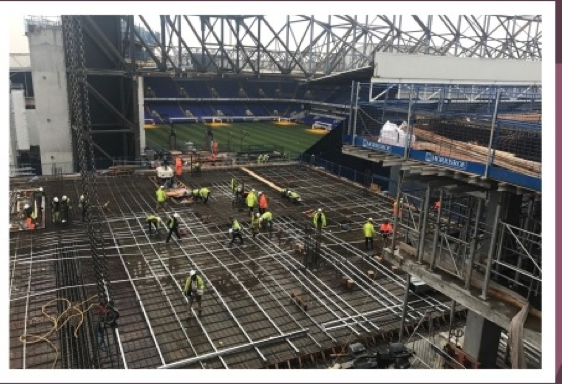 The project is an ambitious project with 112 post-tensioned slabs included in phase 1 of the construction of this landmark building. The programme for the work was based around the necessity to maximise the number of home games that could be played while the new stadium was constructed around the old stadium while still in use. The judges were impressed by the number of challenges the project team overcame, including the research done by the team to discover the effects of curving the flat ducts on plan. They were also impressed by the speed achieved on site and the savings achieved by the use of post-tensioned concrete. 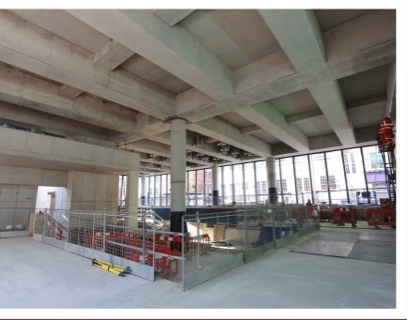 The new works at Tottenham Court Road Station for Crossrail necessitated the use of post-tensioned beams as the only realistic solution. The innovative solutions included the design of bespoke grout caps for exposed anchorage ends. The judges were impressed by the various innovative solutions which were required to complete this highly complex project. 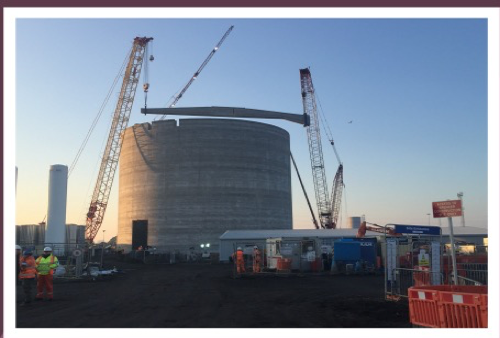 The Lynemouth Power station is located in the Port of Tyne, Newcastle. The design and build contract required three identical silos to be constructed. Post-tensioning was used in the roof for six long span beams per silo, originally proposed as either steel or hybrid reinforced concrete beams. The beams are precast, post-tensioned beams with a maximum length of 45m.

The judges felt that this was an excellent entry, showing how post-tensioning can be used to improve a design with this innovative alternative solution. 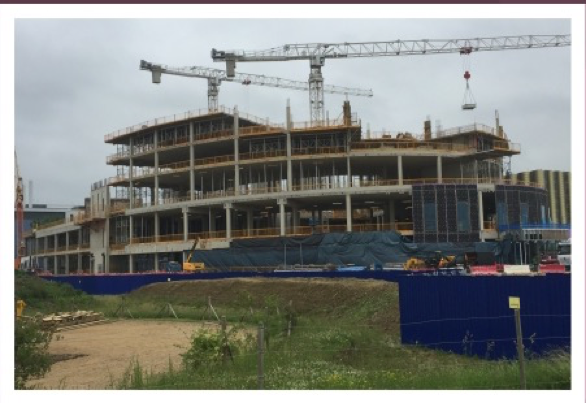 The new Papworth Hospital, specialising in cardiac care, is located in the Cambridge Biomedical Campus next to Addenbrookes Hospital. It is a 310-bed unit with 7 state-of-the-art operating theatres. Although the building is 127m long it was built with only temporary isolation, taking out the need for movement joints which can provide an infection risk. The building is oval in shape from Level 3, with a transfer deck at level 2. This transfer deck was the biggest challenge to the design with point loads of almost 10MN being transferred.

The judges were impressed by the engineering of the project, which coped with the irregular grid and maintained thinner slabs and beams. The post-tensioning also had to cope with curved slabs. Taking out the movement joint was also considered to be an advantage that the designers were able to achieve with the use of PT.

This award recognises trainees who are succeeding in early development and learning through support of their organisation. This award has been judged on the basis of the trainee’s professional and personal development and their mentors’ recommendations.

The four entries for this category were all excellent candidates for the award and it was a pleasure to see such talent coming into the industry. 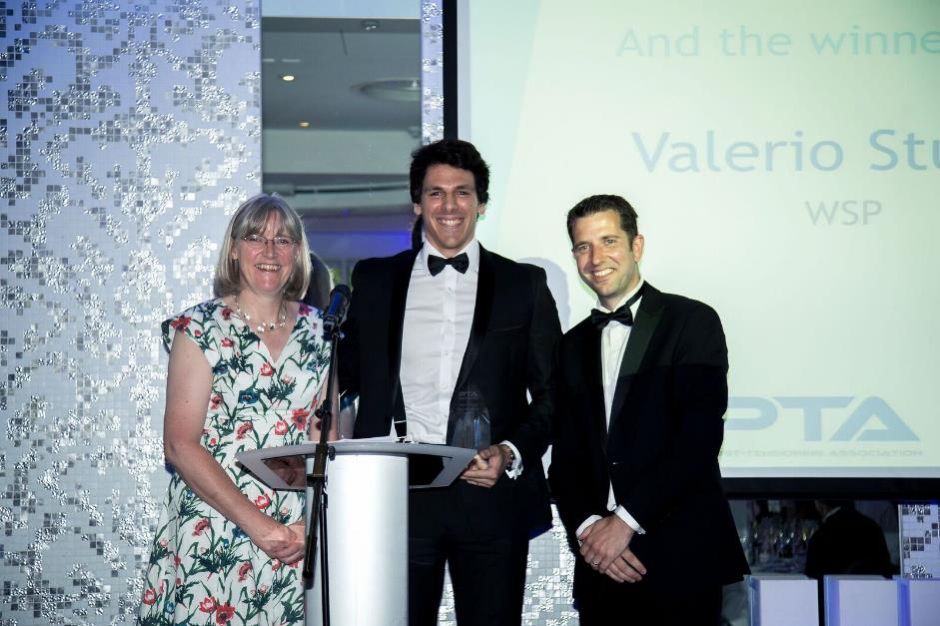 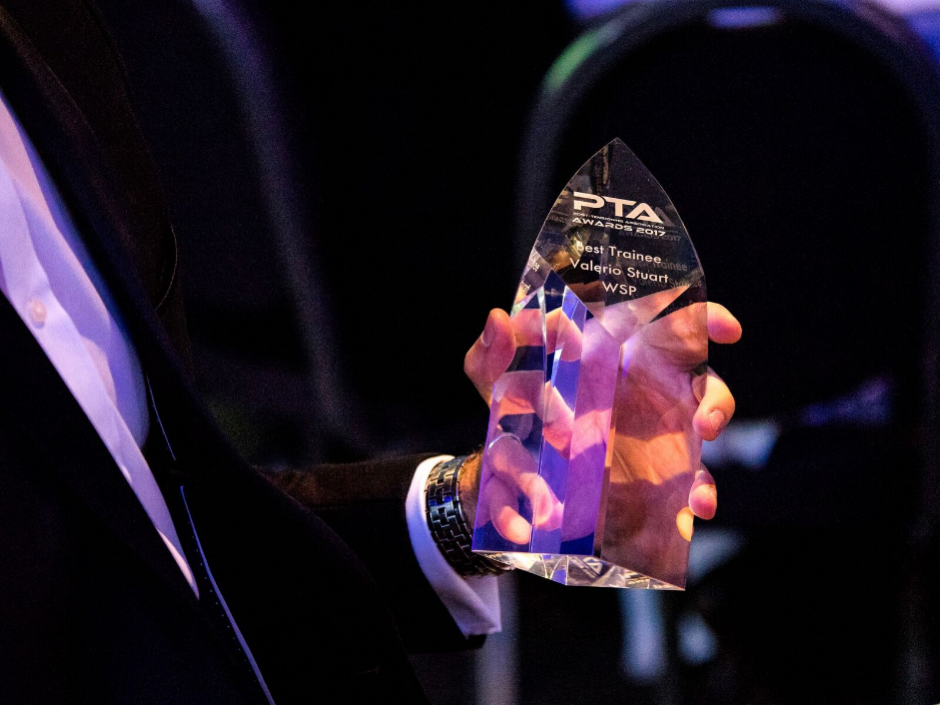 Valerio is a structural engineer who joined WSP building structures team as a Graduate in 2014. He has been involved with a variety of projects including a small retail scheme, a new state of the art hospital in Scotland, refurbishment of existing buildings and high rise residential towers.

Valerio expressed his interest in the design and analysis of post-tensioned concrete as this technology was used on some of the projects he was working on. In order to do this, he put himself forward for a comprehensive and in-depth training in the London Office.

He is active inside and outside the office: he is the lead office representative for the WSP Professional Growth Network (PGN) and member of IStructE young members committee. 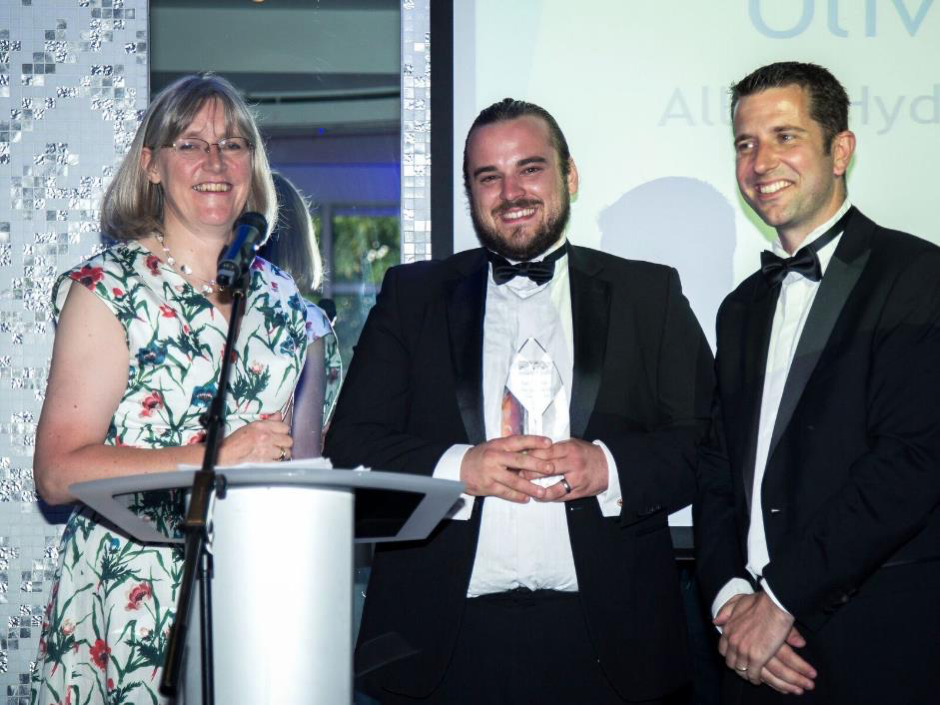 Oliver joined AHE 4 years ago and has established himself as a competent engineer. Two years ago, after showing interest in post-tensioning and heavy lifting areas, he was put on an action plan. He has since developed a good knowledge of post-tensioning processes and maintenance of the equipment.

He has shown an aptitude for all aspects of the work he undertakes and has shown an ability to be trusted with tasks that are unfamiliar. He is eager to learn and has proved to be a capable, flexible and valued team member. 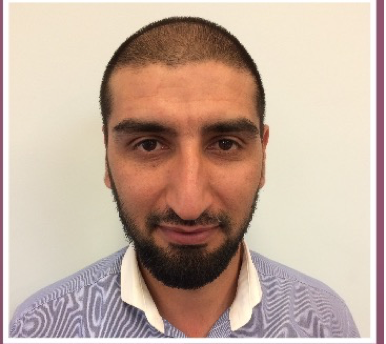 Zmerially is currently an engineer with structural systems having joined as a graduate in 2015. He quickly developed to take on responsibilities as an engineer through dedicated learning. He was initially responsible for site inspections on a series of post-tensioned residential building in East London and has since moved onto design on mixed development projects. He is now involved with projects from the tender stage through to delivery.

Zmerially is a keen learner and has just completed a master’s programme in Structural Design and Construction Management. 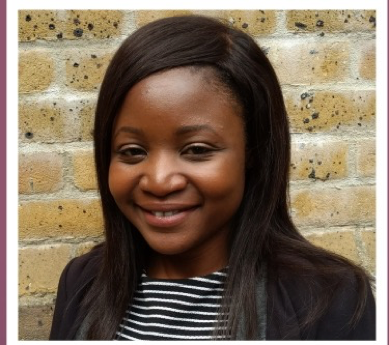 Since Kuda joined Walsh, she has been very enthusiastic Engineer who shows interest in learning every new concept to design. She learnt the basics of post-tensioning within a few months of her training.

Kuda’s involvement on projects includes coordination of different trades, design of key elements and taking off quantities for estimation purposes. 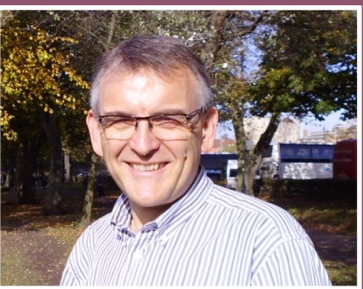 Andy Truby is a chartered Engineer with over 30 years’ experience of structural engineering design. Andy is one of the two founding directors of Truby Stevenson Ltd. Andy has previously held senior positions as Head of Structural Engineering at both Gifford LLP and Ramboll UK Ltd. Andy has a broad experience of delivery in projects across a range of sectors and procurement routes. He has a particular interest and expertise in the design of concrete structures particularly those adopting post- tensioning.

Andy is a member of fib (federation internationale de béton) Commission 1 (structures) and is currently the convenor of fib Task group 1.3 - Buildings. This group has recently completed fib Bulletin 73 - Tall Buildings - Structural design of concrete buildings up to 300m tall. Andy was also a member of the drafting committee for the Concrete Society Technical Report 43 - Post tensioned concrete floors (second edition) and was involved in the drafting of Concrete Society Technical Report 72 - Durable Post-tensioned Concrete Structures. 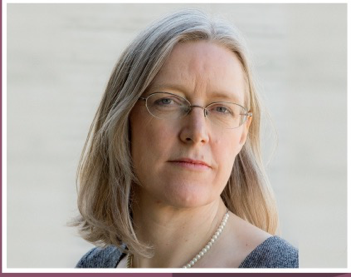 Head of Structural Engineering at the Concrete Centre

Jenny leads the team of structural engineers at The Concrete Centre which is the central development organisation for the UK Concrete industry dedicated to enabling all those involved in the design, use and performance of concrete to realise the full potential of concrete.

Jenny is a chartered civil and structural engineer with more than 30 years’ experience in the construction industry. She has worked for Arup and AECOM designing award winning buildings in both the UK and mainland Europe. Prior to becoming Head of Structural Engineering, she spent four years as a regional engineer with the concrete centre advising clients, engineers and architects on the most efficient and effective uses of concrete.

She is the UK representative on the CEN task group looking at revisions to the fire part of Eurocode 2, and is past chairman of the Thames Valley Regional Group of the Institution of Structural Engineers, where she also sits on the examinations panel. She is secretary of the PTA and chairs the marketing committee. 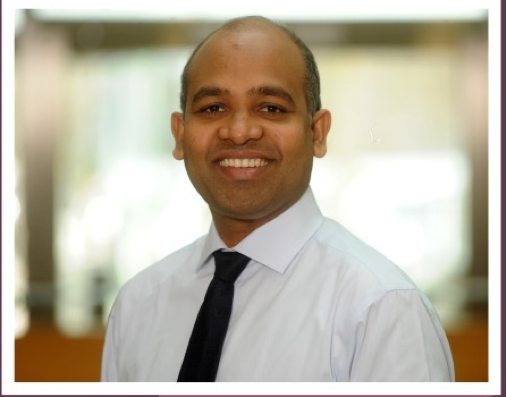 Nadarajah Surendran is a Chartered Structural Engineer and one of the two founding Directors of Praeter Engineering Ltd which mainly focuses on prestressing design, supply and installation. He has been involved in the PT industry for the last two decades with experience in Asia, Australia and the UK.

Suren is a past chairman of the PTA and was a member of the UK CARES policy advisory committee (PAC). He has been a member of fibUK since 2012 and is currently serving as its vice-chairman. Suren is also a member of the fib Task Group 1.3 Buildings that aims to publish reports on the latest technological developments in the industry. He is also a member of the review committee for the Concrete Society “TR43-Post-Tensioned Concrete Floors” (upcoming Edition) and IStructE “Standard Method of Detailing Structural Concrete” (upcoming edition). These two publications provide industry guides for the design and detailing of prestressed and reinforced concrete structures.